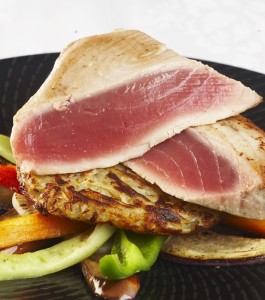 Neil Ramsden
www.undercurrentnews.com
French tuna and toothfish firm Sapmer saw a good performance from its premium, processed tuna line in 2016, which should result in profit from that segment in the year.

This was according to Paul David, Sapmer sales director, who also updated Undercurrent News on the company’s expansion plans.

Sapmer has been going through several years of transition, after CEO Adrien de Chomereau led a strategic change to process only the highest quality tuna, and sell more as whole fish to canneries.

“The changes operated are taking effect, and we are seeing the first positive results that encourage us to strengthen our quality driven strategy,” said David.

“The first six months of 2016 were supported by good overall fishing conditions and decent prices on the international market. We are now facing again a decrease in price on the raw tuna cycle market.”

This has served to emphasize the importance of the premium tuna product line, which is less influenced by “international cyclical prices and the regular hiccups” this market faces, he added.

“For processed products, our focus and the focus of our clients is regularity, stability, quality and dedication in supply.”

The sales of these processed tuna goods is separate from the volatility of whole round tuna prices, and is successfully bringing in profit this year, he said.

2016 has seen Sapmer looking to build on its move into tuna, which began back in 2008. It started by supplying deep-frozen tuna to Japan, where the ability to provide it at -40 degrees was a competitive advantage, said David.

Today it supplies to retailers Carrefour, Picard and Auchan in France and Europe, as well as foodservice players.

“These successes encouraged us to diversify our markets. The US, South Africa, Canada, United Arab Emirates and Australia are some of markets where we have started to export to, and we will give them the necessary service and marketing support to make them grow.”

The added services it has put in place around its premium products have also helped Sapmer penetrate Italy and South Africa, David added. “Our local markets Mauritius and Reunion Island are also growing, exciting markets.”

Sapmer is also working to add to the value proposition for customers, for instance with a new website aimed as much at the end user as at professional chefs and retail buyers.

Speaking at the end of November, Sapmer confirmed prices for toothfish remained high, as “ justified by small volumes available and the quality of this fish”.

“The toothfish market is still very receptive, being pulled by a high demand in the US and China,” said David. “Other markets are growing such as Europe and the Middle East, with the help of our MSC [Marine Stewardship Council] certification.”

As reported in November, the overall supply of MSC toothfish was actually down slightly, no doubt pushing prices up — at that point, to around $30 per kilogram.

Sapmer operates four identical sister longliners, one of which was delivered in August 2015, a replacement for an older vessel, completing the set.